My younger daughter is in South Africa. She did not go there to do very silly things but to start her career as a documentary film-maker. The first very silly thing she did was go surfing on a beach with the red flag up.

"What does the red flag mean?" I asked, in my foolishness.

"Well, it's not as bad as the black flag. The black flag means there's a shark in the water."

"A shark has been seen recently and basically everyone should get out."

"Because the instructor said it was OK and, anyway, lots of other people were in the water." 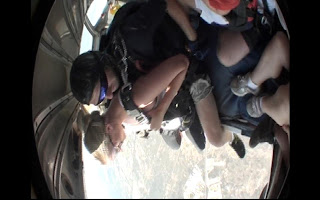 "Do you have your instructor's phone number??? I would quite like it."

The second very silly thing she did was jump out of a plane. Well, I say "plane". Judging from her description and some of the photos I've seen, it was more biscuit tin without lid. But wings. Well, I say "wings"...

"Weren't you worried about that crappy plane?" I asked, in my foolishness.

She's been fascinated by Africa for ages, and would love to end up making documentaries for a big charity there, perhaps an AIDS charity or focusing on women's health and education. She has been doing a work placement with a documentary film-making company in Cape Town, and learning masses. They asked her to stay a few more weeks, which she did, but last week she set off travelling, to soak up and learn more about Africa, taking in Mozambique, Malawi and Tanzania, including Zanzibar. On her own.

I don't think that's silly. I think it's brave. But I'm still worried.

Email ThisBlogThis!Share to TwitterShare to FacebookShare to Pinterest
Labels: my family