The Crabbit Hutch in pics

As you know, unless you naughtily haven't been listening to me at all, I now have a shed. No, I have a garden office. It's far too glorious to be called a shed. I was going to have a competition to name it but Mike Jarman christened it the Crabbit Hutch and that's what's stuck. I have to say it's nothing like a hutch but never mind!

Anyway, here is the journey from nothing to Splendiferous Garden Office, aka Crabbit Hutch.

First, there was this: 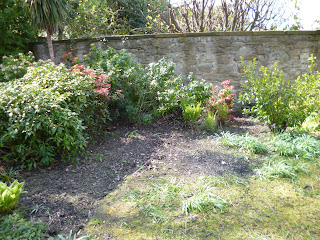 Then, it rained, and the men from Booths Garden Studios arrived. They didn't complain even once, but got on and constructed a huge tent, under which to build. I was mildly amused at the thought that my neighbours would be thinking THIS was going to be the size of the shed. 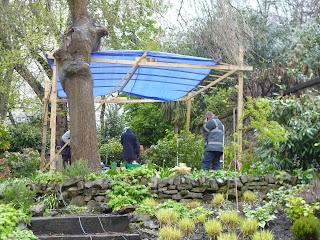 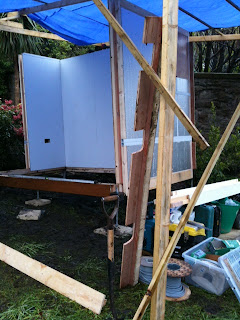 But soon the Crabbit Hutch was standing forlornly in a sea of mud: 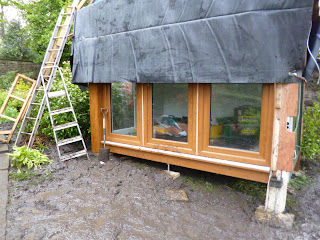 And the lovely men from Booths were looking well-pleased with their job. 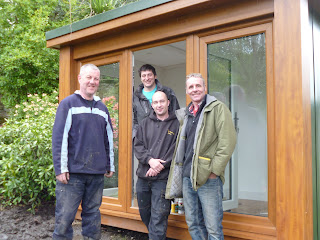 An electrician came and used a HUGE drill bit to drill through my kitchen wall. His comment afterwards: "That was epic." 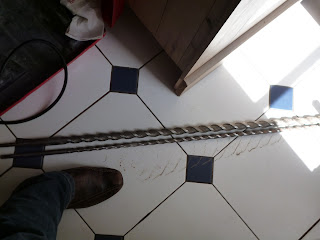 I began to put some shelves up and bring the stuff up from the flat to the hutch, box by box by box. 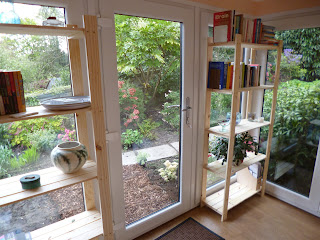 And I had my first cup of coffee, in a very appropriate mug. 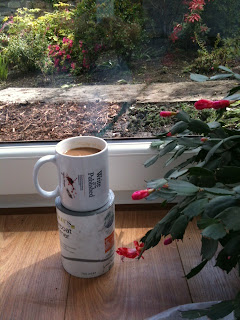 Soon, things were beginning to look both homely and businesslike, because, of course,
much crabbit business must be done in the Crabbit Hutch. Behind my desk, you can even see the board on which I'm plotting a novel, so that's good. 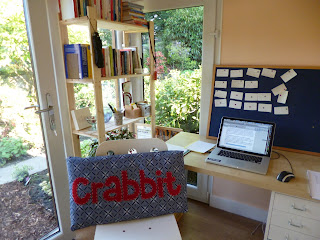 At first, Mr M and I were concerned that the hutch wrecked the view up the garden and that the neighbours would be cross about the in-your-faceness, though we had got planning permission. 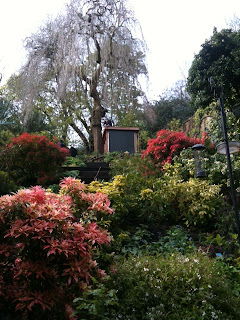 But I went out and bought some VERY tall bamboo plants and I think you'll agree it is now very discreet. In fact, we could play Where's the Crabbit Hutch?! And yes, really, it is in this picture: 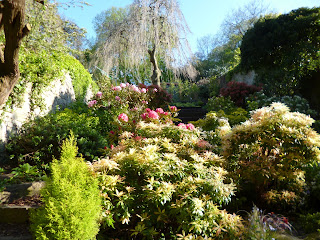 Only one family member is not looking too happy. She refuses to come in because she hates walkiing on bark. Stupid dog: we taught her not to bark, not to not go ON bark. 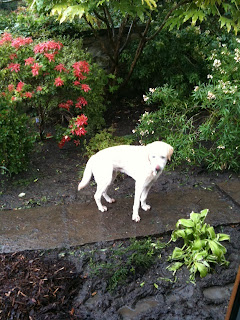 And there you have it! I've had one day working in it and it was just wonderful. With the door open, I could hear nothing but birdsong and see nothing but flowering rhodies, azalea, pieris, and a castor oil palm. I've planted dwarf lilac outside and the breeze wafts the smell in. With the door shut it's entirely soundproof so I can listen to loud music and sing at the top of my voice. It is incredibly well insulated so it's cosy and comfortable. I have installed wifi, so I can still use Twitter and be distracted. And I can walk to work with a briefcase.
I love it!

If you're interested in doing the same, Booths Garden Studios are just fab.

And look what Mr M bought me: 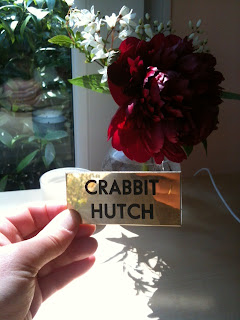