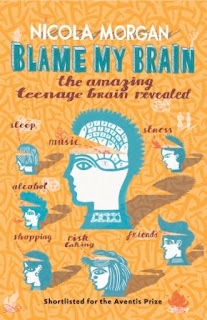 Today I'm in Lancashire, doing a talk on the teenage brain for professionals as part of the Lancashire Children's and Young People's Trust. Before I catch the train, I thought I'd quickly put some tips up here, as I won't have time to go through them today. The main part of my talk is NOT parenting tips, because I am NOT some kind of older Supernanny, but the programme does say that one of the outcomes will be a better understanding about how to parent teenagers. I don't much like seeming to think I'm some kind of expert parent (ask my daughters about that) but I know it tends to be what people want. What I mostly want to talk about is how fascinating the brain is.

These tips won't make the fullest sense if you weren't there to hear me talk about what's going on in the brain during adolescence, but you know you can always read Blame My Brain for that...

Some tips for being a parent to teenagers

1. Understand some of the reasons for adolescent behaviour – this removes a sense of blame. (Lots of explanations in Blame My Brain.)

3. Boundaries – if we set boundaries, they know we care (even though they may not show it!); they also like something to fight against. So, set your boundaries carefully and be prepared to be a bit flexible. A negotiated boundary is stronger than a rigid autocratic one.

4. Choose your moment to have a conversation - do you like being interrupted when you're relaxing or engrossed in something. Negotiate when the conversation will take place, if necessary.

5. Modelling good behaviour - we learn partly by imitation. As your teenager watches you managing to control your emotion, his own brain is preparing to imitate that. And vice versa...

6. Choose the battles to fight - do untidy bedrooms matter? On the other hand, some battles over less emotional/critical issues are safer grounds and may be satisfying to the teenager.

8. We are less responsible than we think. We can get all this right and still our teenager may struggle. Don't beat yourself up.

9. Put ourselves in their shoes – recognise how we bristle if given advice/criticism. So, treat your teenager more as an adult than as a child in how you talk to them. This takes a long time for parents to learn to do!

I'll have more details later but just now I must rush to my train...