Who are my fellow combatants?

Until just now, I felt like part of a secret society. A secret society at which I'm going to have to fight and be stroppy and possibly even crabbit.

Some months ago I was flattered to be asked to be one of 50 authors from around the world to make up the Edinburgh Writers' Conference. (I don't mean do their make-up, silly...) Why do I need to be stroppy and fighty and everything? Well, because the conference is designed to mirror the writers' conference in Edinburgh 50 years ago, in 1962, when authors such as Norman Mailer and Muriel Spark debated cultural issues and apparently some of the speakers "nearly came to blows". I'm pretty sure this is why I've been invited.

But who else has? The identity of the 50 authors was a secret so I couldn't talk about myself it till yesterday, when the Edinburgh International Book Festival programme was launched. I thought we might learn then. 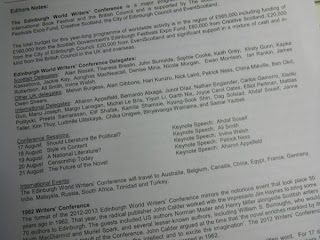 Well, apparently there was a press release in my goody bag at the launch, but there wasn't in mine. So, a quick plea on Twitter elicited this pic from @robaroundbooks and now, if I peer really hard, I can see the names.

Thank goodness, because otherwise it would have been like a blind-fold wrestling match. I like to know who I have to be crabbit with, even if I don't hit anyone.
______________

Tonight I'm in Dumfries and Galloway, as I'm speaking at a conference tomorrow for writers/aspiring/self-published, all about social media, blogging etcetcetcetc. A long drive and lots of time for thinking about my current novel - in which I have come to a horrible complete standstill because I have NO IDEA what happens next. This is the worst case of mid-book crisis I have ever had. :(

I'm telling you, if I haven't cracked it by the time the Edbookfest happens, I will be highly likely to hit someone. Whoever they are.
Posted by Nicola Morgan at 17:00

Email ThisBlogThis!Share to TwitterShare to FacebookShare to Pinterest
Labels: events