There's a scene in WASTED where a pigeon smashes through a window. A couple of people have doubted whether this is likely. Well, it may not be likely, but it's happened to me. Twice, in the same room, involving the same window. Here's how I told the story of the second encounter back in 2008


CLOSE ENCOUNTERS OF A PIGEON KIND
As my friends will know, I'm easily distracted when I am supposed to be writing. Usually by emails or people challenging me to Scramble on Facebook or suddenly feeling compelled to vacuum behind the fridge. Anything, really, to provide an excuse for not doing that very difficult thing: writing. But yesterday I was actually writing quite well. I'd not checked my emails or the back of the fridge for at least five minutes. Well, maybe three.

So, there I was, sitting on the sofa near the window, laptop on lap, typing away, when there was a huge explosion and the window blew in, as a vast and fierce pigeon smashed through it, showering me with glass and blood. I screamed. A LOT. And rushed from the room, dumping the laptop and slamming the door behind me. I spent some time screaming on the landing and trying to calm down. I was worried that my daughter might have been concerned so I weakly but bravely called upstairs, "Don't worry, I'm fine, honestly." No reply. I tried a bit more strongly. Hannah came out of her room. "What are you talking about?"

Anyway, we couldn't leave the bird in my study, could we? I had visions of it wrecking the place and, more to the point, my NOVEL was in there. Also, since my other daughter only last week had to claim insurance for the cost of repairing her laptop after spilling milk on it, I couldn't really claim for another laptop and expect them to believe that a pigeon had bled to death on it. The insurance company know I'm a writer and they'd be bound to think I'd made it up.

So, Hannah stood behind me, holding a big towel as high as she could, with the intention (in case you were wondering) of preventing the bird from flying further into the house if it leapt through the door when I opened it. I carefully opened the door a little, which caused more flapping and squawking (actually, I think the squawking was me) so I slammed it shut again. Deep breaths. Can you call a man to deal with a pigeon in the room? Does this constitute an 999 emergency? What would it be under in Yellow Pages? Bloody Bird-catchers?

But we didn't need a man, oh no. No, we could deal with this ourselves. First, I needed a shield. A large cardboard box would do and this I duly found. So, armed with the box, I opened the door again, with Hannah in towel position. No sign of the bird. Well, it must be dead. Or stunned. Or demoniacally hiding, waiting for me. Or it could come flapping back to consciousness if I wasn't careful. So I was careful. I gingerly poked a stick into every possible hiding-place, averting my eyes from the blood on the wall.

It had gone. Back through the gaping hole in the window. Presumably. The rest of my day was spent clearing up shattered glass and blood and dealing with the neanderthal glaziers who mumped and grumped their way to £90. And I lost half a day of what would obviously have been quite brilliant novel-writing. The best I've ever done. Really. 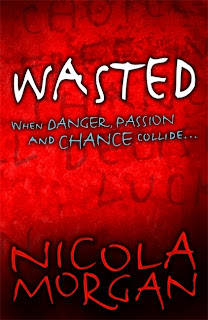 Since the novel in progress, WASTED, is about chance/luck/causal determinism/randomness/chaos and how apparently chance events have major effects on our lives, I wonder how this pigeon attack will affect the novel. The point of the novel, if you are interested, is that we cannot know how things would have turned out differently - we can't do what ifs. So, we can ask "What if the bird had never flown through your window? How would it have affected what happened next in your novel?" But we can never know the answer. All you can ever know is what actually does happen from that point. (Actually, in the novel, the reader can play round with chance because you get to toss a coin to determine the ending, and I get to toss a coin to select between alternative chapters. But I digress.)

You may like to know that by chance (or is anything ever chance? Isn't it all mechanically caused?) the scene I was writing at the time of the pigeon explosion needed something to happen that randomly affects the timing of an event. Perfect!So I put it in the book.

Chance? Fate? Or causal determinism? Makes you think. If a kamikaze pigeon hadn't shot through my window, would I have thought of this as the mechanism in the story? Or would it have been something else entirely? And would that affect everything else? We'll never know.
Posted by Nicola Morgan at 17:00

Email ThisBlogThis!Share to TwitterShare to FacebookShare to Pinterest
Labels: my writing, Wasted